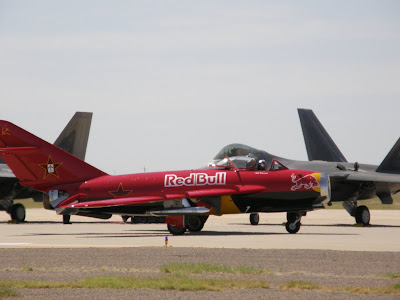 I just noticed this photo in the batch I took at Luke this weekend. (Click in image for full size). It needs thought bubbles - MiG pilot, "Cool!"... Raptor pilot, "Snack!"
Posted by Pogue at 5:32 PM No comments:

Thunder in the Desert 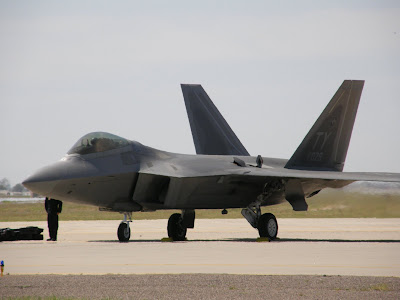 Luke AFB puts on a nice open house and airshow every year that attracts a lot of interest. With the schedule I've been running it's not been something that I've been able to get to for several years. This weekend however, it turns out I didn't have anything scheduled so Her Accuracy and I went out Saturday. Some photos here.

For as big an event as it is they handle the access, parking and crowd control really well. Lot's of neat civilian and military static displays as well as flight demonstrations. The Raptor was awesome, and being a rotorhead I really liked the Red Bull aerobatic helicopter as well. We got some pretty decent video, but I haven't edited it yet. Also got to meet blogger chic[k]pilot who's started posting again after a long break (like I should talk...)
Posted by Pogue at 11:38 AM No comments:

Still not ready to play nice. 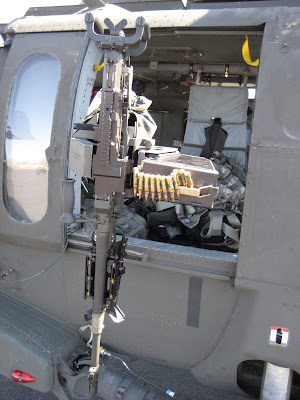 One of my friends recently asked me if I wasn't getting a little "long in the tooth" for the kind of things I'm doing these days. I had to think about that a little bit, and decided it was worth exploring a little. My stock answer is that I got fat and lazy in my 40s and decided I didn't like it, but while that isn't inaccurate, it's really not as simple as that. I decided a long time ago that I really had no desire to work in a job that I didn't enjoy. I also decided that it would be in my interest to take jobs I enjoyed that also paid well. (For some reason a lot of people seem to think those two conditions are mutually exclusive.) This has worked well for me. When I got out of the Navy I had training and experience in electronics that allowed me to work into progressively better jobs in short order. Since I enjoy learning as well I increased my skill set and wandered into nuclear power operations, a computer science degree and from there into the computer world. Throughout this process I've moved around the country several times and met a lot of good people. Made good money and had a good time along the way. Still, after a while that becomes a little monotonous. A well upholstered, comfortable rut, but a rut none the less.
By the time 9/11 happened I was in those fat and lazy 40s I mentioned earlier, and that was something of a catalyst for me. Like many people in the country I wanted to do something, but I was pretty confident that it was a little too late to be getting back into the military, so I just started making some personal changes. With the help of Her Accuracy (my wife) I started eating better. Strangely enough, by eating the right portions of the right things I was actually losing weight while eating more. After about a year I had lost 65 pounds, and that gave me some energy I hadn't had in a long time. So I started running a little. Nothing extreme, run a couple minutes and walk a couple, and suddenly I was running 2, 3, 6 miles in the hills. And enjoying it. So now I'm looking better, feeling better, and I'm seeing improvements in my rifle shooting at matches. So in the summer of 2003 at the Nationals my gunsmith and shooting coach suggested I look at joining the Guard again and work with the team. I thought about it and after doing a little research and finding because of my prior service I could get back in, I did. Back into Field Artillery (I had done that for a few years in the 80's.) The shooting team never worked out since he got deployed to Iraq that year and I got deployed the next.

I enjoyed that deployment. Don't get me wrong - it wasn't easy and I missed being with my girlfriend (now my wife) a lot. Still, I spent a year doing something important to me. I wrote a little about that trip and my return in my last blog Pogue. Since our return Arizona has decommissioned the Field Artillery and as a result I'm now a UH-60 Crew Chief. My unit has received its mobilization orders, and later this year we'll be on our way back to the sandbox.

Here's a few photo's to start things out.

I'm looking forward to it. To those who understand I know I don't need to explain, and to those who don't understand no amount of explaining will be sufficient. Let's just say I see no reason to sit in a rocking chair on the porch as I get older...

And I promise I'll try to keep this blog reasonably current!
Posted by Pogue at 7:46 PM 4 comments: