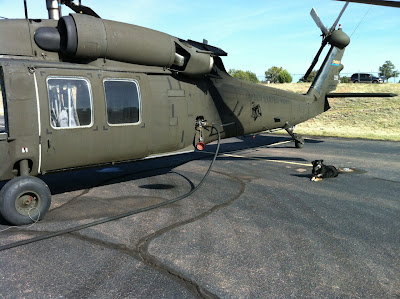 
Out on Lex's site most of the aviation discussion was based around the fast movers, carrier operations, and what it was like to operate the F/A-18 in the tactical environment.  It's said that being out of airspeed, altitude, and ideas is a bad thing. There's another military aviation world where being out of airspeed and altitude are normal, although the ideas are still a good thing.

In Viet Nam with some exceptions Charlie owned the night.  The Army decided this was not an acceptable situation, and while infrared night vision equipment had been available for years it needed a light source which, while invisible to the naked eye, was easily detected with IR equipment.  It's said that DOD noticed that the Soviet tanks used to quell the 1968 Czech uprising didn't have search lights mounted.  Did they just take them off as unnecessary for the mission, or did they have the ability to see in the dark?  During this period of time the "Starlight Scope" was introduced in the Army.  Soon, Army helicopter pilots were experimenting with the early PVS-5 night vision goggles.  In the years since then the tactics and technology have developed, and today we fly with the purpose built AVS-6.

Since NVG's are cool, I thought I'd put up a little video I took a couple years ago so you could get some idea what it's like to use them.  This was shot north of Phoenix on a fairly dark night.  This particular flight was for one of our new pilots, so you can see we had the infrared search light on, which was not visible to passers-by.  The flashing you see is our anti collision lights.  Normally these would be turned off, but when we train in US airspace they're left on so other aircraft can see us.  The camera is looking through the center windscreen of the Blackhawk.  We're taking it easy here, mostly around 100 feet above the ground, and the terrain is pretty straight forward.  Sorry about the poor audio - you miss nothing if you turn it off.  :-)

This is not an exciting video, when you train you don't really want a lot of excitement.  We do a lot of NVG training.