Today's photo was an exercise in lighting.  The camera was set to a shutter speed of 1/320 and f16 at ISO 200 to expose the lantern mantle properly.  An Olympus FL-36R flash in manual mode set at 1/64 power lit the chimney from the front, an a pair of Lumopro LP-160 flashes with grids to restrict the beam lit the base from either side.  These two flashes were slaved off the FL-36R and were also set to 1/64 power.  The photo was taken under normal living room lighting with an Olympus OM-D-E5 and a 12-50mm lens set at 22mm.
Posted by Pogue at 7:45 PM No comments:

Having grown up and served during the cold war prior to the present unpleasantness,  artifacts of that era hold something of a fascination to me.  Since Her Accuracy also seems to have quite the interest as well, over the years we've managed several trips, some of which (like the Trinity test site) are not particularly easy to get to.  One of the common frustrations I have is that very few places let you inside an exhibit - I'd love to explore a B-36, for example, but the places that have one restored to near operational status are understandably hesitant to let the unwashed masses rummage through their irreplaceable exhibits.

This weekend we visited the Titan Missile Museum just south of Tucson which is the exception to that rule.  Complex 571-7 in Green Valley, Arizona was operational from 1963 till the Titan II was decommissioned in 1987.  One of 54 site around Tuscon, Little Rock and Wichita, someone had the amazing foresight so suggest saving a silo complex for posterity.  Bless them, whoever they are!

Picture of the Week 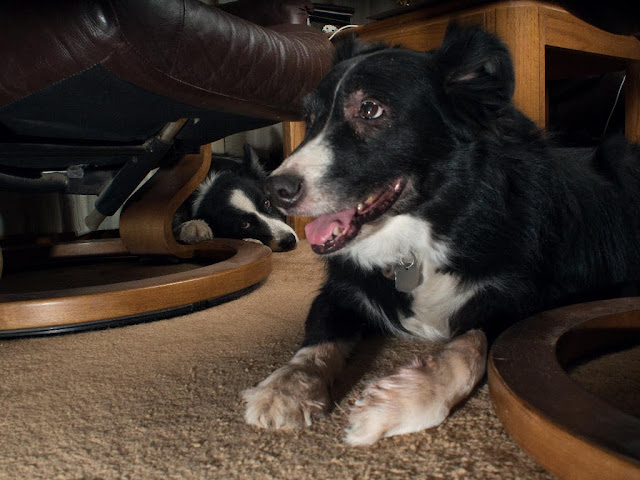 I've played with photography off and on over the years, and I'm starting to mess around with it a bit again.  So in an attempt to keep myself engaged I'm going to try to post a picture each week that I've taken in the previous week.  No particular theme or subject, just whatever strikes me.  We'll see how long that lasts....

This week I present our two Border Collies, Fly (front) and Whiskey.  They like to hang our around our chairs in the evening.