Al Kut fly by
Flexibility is always a useful trait in the military. Due to operational requirements we've moved from Al Kut in southern Iraq to the central part of the country, where we're flying with our regular Army counterparts. It's been a busy few weeks - we ran our mission sets right up to the time we left the southern command, and started working with central within three days. Unlike FOB Delta where it was just us and the Medivac birds, here we have Blackhawks, Chinooks, Apaches, and Kiowa Warriors here along with Iraqi UH-1s, OH-58's and Mi-17s. 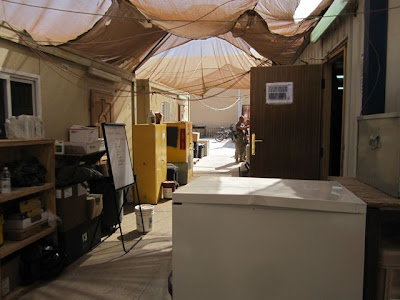 Moving in
We're only now getting settled into our new routine. After setting up our working area we've been working some pretty long days between learning how our parent organization operates, flying, maintaining the helicopters and moving from the transient quarters we were initially put in to our "permanent" CHUs. 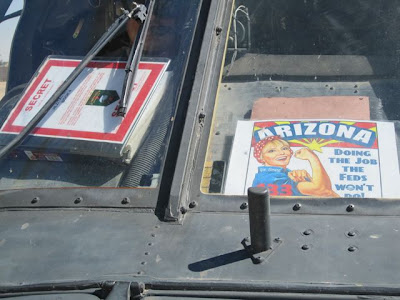 A statement
Working with the regular Army is interesting. The guys we're with have been absolutely outstanding in helping us get up to speed. The maintenance people supporting us are top notch and have really been helping us keep flying. They were a little startled that we're flying helicopters that are older than most of the guys working on them. (Our oldest birds were built in 1979.) The days of there being any confidence issues between the Army and the National Guard appear to be history. These guys are treating us as part of the family and while we're changing some of our practices to align with theirs, they've shown no hesitation in adopting some our our practices as well. 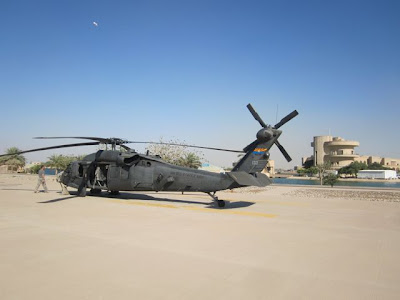 The nice part of town
Flying in the central part of Iraq we now see quite a bit of the former Green Zone and move a fair number of VIPs around, most recently Senators McCain and Lieberman. Even though he knew we were an Arizona guard unit McCain didn't even say hello. I guess he's not involved in a hotly contested campaign back home, or he doesn't realize we'll be back in time to vote for Hayworth. 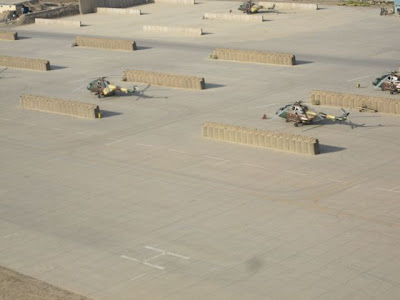 Iraqi Mi-17's
I've been following with interest the mild uproar over US aid money being used to buy Mi-17's for Iraq. I really don't see the issue unless it's that Sikorsky and Boeing are mad at not getting a piece of that pie. The Russians know how to make helicopters and the 17 is a good bird for medium to heavy lift. Relatively cheap, simple, easy to maintain and the Iraqi's have experience in working on them. Iraq has also got Huey's and OH-58's so it's not like they're not using American equipment. Boeing and Sikorsky have successful modern helicopter lines so they're not hurting for market. Bell seems to think that the 1960's was the epitome of helicopter development so they probably needed the bailout more than the others. 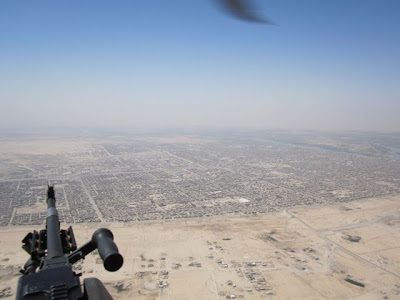 The bad part of town
Belleau Wood... Iwo JIma... Chosin... Hue... Famous names in Marine Corps history. There's another one that's been added to the list - Fallujah. Doesn't look like much from the air, does it? Pretty much in the middle of nowhere between Bagdad and Ramadi in the Anbar province. Here was where the Marines fought the first and second battles of Fallujah. Here is where one of the best quotes of the war was made by General Mattis to Iraqi tribal leaders, "I come in peace, I didn't bring artillery. But I am pleading with you with tears in my eyes: If you fuck with me, I'll kill you all." The Iraqi military was defeated in Bagdad within days of the start of hostilities, but if you had to pick a place where the war against Al Quaida was won the Anbar province would likely be it.