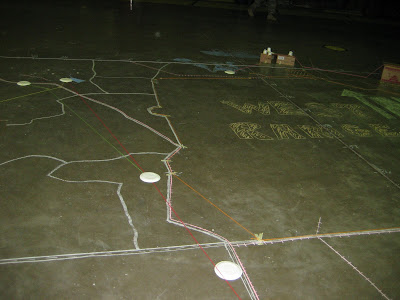 It's kind of funny with my background being in Field Artillery that our mobilization site is Ft Sill, the Army's home for all things artillery. I was last here a couple years ago for annual training with A Battery, 2-180FA. While the facilities and support are OK, we are kept fairly isolated from the main portion of the base and have limited transportation. I also have to admit to being confused as to why this is an aviation mob site. The area is not particularly well suited to training for either the desert (Iraq) or mountain (Afghanistan) environment, and aside from the fact that there is an airfield here there doesn't seem much to commend it. There are quite a few ranges, but most are dedicated to howitzer and rocket fire. It seems to me that Ft Hood in Texas, Ft Carson in Colorado or Ft Rucker in Alabama would make more sense since they actually have the infrastructure built in. This is particularly evident for terrain flight and air assault training where the area available is limited. The aerial gunnery options are also tight compared to the Barry Goldwater range in southern Arizona that we're used to. This is not to say that the training is ineffective, it's just somewhat limited by the environment. Of course, we also don't have the same preflight hazards here as back home. 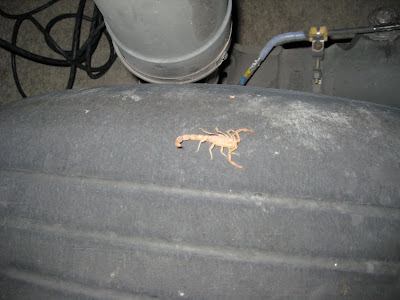 I think this guy wanted to go for a ride
Once we leave the military reservation for cross country flights the local area does work well for us, although I'm not used to having the machine guns out when flying over civilian populations. We don't carry ammunition on these flights, but I really don't like training the weapon anywhere people might be even unloaded. We have flow several missions to local airports practicing what are called ring routes where we deliver people and cargo where they're needed. These flights usually consist of three to four hours of flight time with landings at several fields and are used to evaluate our ability to execute missions on time with minimal notice while having to deal with real and "notional" maintenance and scheduling issues. Our evaluators also throw in simulated mortar attacks and other environmental problems to stress the system. While is seems trivial, just the mechanics of getting helicopters, weapons and crews all together and ready to go at the right time takes some practice. Once all the pieces are in place the crews are evaluated during the flights for their ability to perform the various crew functions, communicate effectively and operate as a team in simulated combat conditions.

As a crew chief once we're on our mission profile the primary responsibility is maintain airspace and surface surveillance, sometimes referred to as looking out the window. Most of the area we fly over is farm country, and from the air it's beautiful country - one can see how a farmer gets so attached to their land. It's also a nice break when we get to talk with some of the locals during fuel stops. The high point for me so far was a stop at Duncan (waving to Bag Blog) where we were met by three local children who were clearly excited by our arrival, but demonstrated excellent airport manners by staying well away from the ramp area. 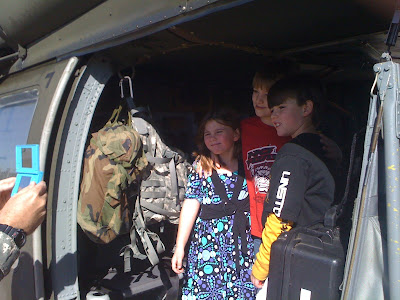 A photo op with our young visitors
Even when we invited them to come look at the helicopters they ran off and got permission from their father first, and asked very politely if it was alright to take pictures of us. I'm not sure who enjoyed the experience more, them or us. Tommy working on driver training documentation after hours
This coming week we'll be doing night missions so I'll be back on the night vision goggles. It will be interesting to see what kinds of missions we get.
Posted by Pogue at 12:58 PM 4 comments:

We've wrapped up our state training time now, and are officially mobilized on Federal orders. The last month has been busy, occasionally frustrating, but mostly productive. From a practical standpoint a National Guard aviation unit can be broken down to three type of soldiers. What most people think of for the Guard are "M-day" soldiers. These are the one weekend a month, two weeks annual training guys. The next group are AGR. These are full time National Guard soldiers in key positions. They can be thought of as kind of a cadre responsible for most of the organizational and planning tasks necessary for the unit to make their training time as effective as possible. Finally there are the technicians. While it's not a requirement for the job, many technicians are M-day soldiers whose full time jobs are maintenance and support government positions. When the unit is between drills these are the guys who do the work to keep the helicopters flying. 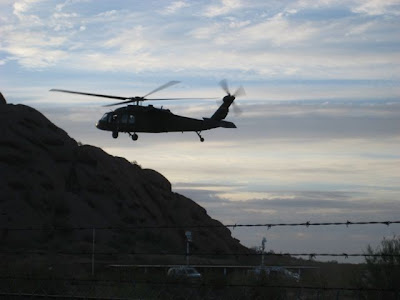 Now that we're on an active duty status we've been working on two major tasks - first integrating the M-day soldiers into the full time maintenance process to clear as many "gripes" as possible on all the aircraft, get all the inspections coming due soon done so as not to interfere with our training requirements at Ft Sill, and to make sure all the helicopters are ready to go. The second task is to get the air crews current. While the Guard provides for additional training periods for aircrew, due to their full time jobs not everyone can take full advantage of the opportunity. These soldiers have been the priority for flights. Of course we've continued training on mobilization tasks, qualified everyone on aerial gunnery, had a PT test, etc. We also had the opportunity to spend a little time with family before leaving for Ft Sill. 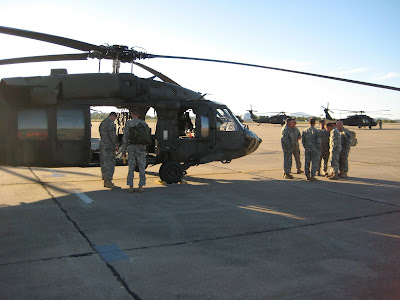 The flight out was unremarkable taking about eleven hours of which about seven hours were actual flying time. (The video above of our departure was put together by Her Accuracy. Nice job, Sweetee!) We did stop a couple of times for fuel and lunch along the way. Unfortunately when we arrived we had to immediately proceed to an in briefing. I guess it's good to get it out of the way, but I'm pretty sure none of the flight crews retained any of the information. In addition to the thirty Blackhawks of our battalion there are a half dozen or so Chinooks from Ft Eustis here that are mobilizing for northern Iraq.
Our first few days here consisted of verifying paperwork, which went quickly, getting our RFI (Rapid Fielding Initiative) issue of flight suits and enough cold weather gear to keep us toasty in the outer reaches of the solar system. This confirmed to me that we are indeed going to the desert. My last deployment was to an area where "cold" meant 50 degrees, and they issued us gear better suited to the arctic. 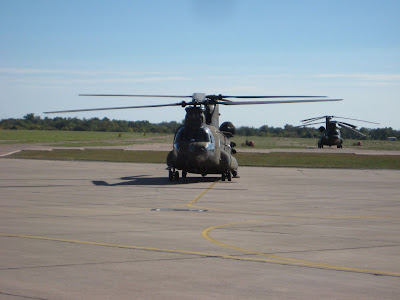 The weather at Ft Sill didn't cooperate for the first week we were here, severely limiting our flying. This week the skies have cleared up and we've resumed crew training flights. Since I'm already qualified I'm only flying at night with the night vision goggles supporting pilot currency flights. We'll be starting our mission and evaluation flights before too long, until then I'll be doing a fair amount of maintenance work. We still have some ground training to do yet as well. Much of it is of limited value to an aviation unit, but after some regrettable training deficiencies that became apparent early on in Operation Iraqi Freedom, the Army has decided that every one gets additional training on common soldier tasks prior to deploying.

Channel 3 news coverage of the departure.
Posted by Pogue at 9:21 AM 4 comments: