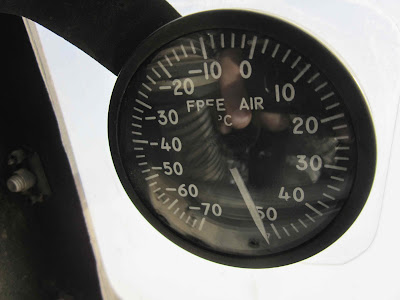 I've been pretty bad about posting lately, mostly because our daily routine is just that - routine. So I'm just going to toss a couple of random thoughts out there. First is the question, "How hot is it?" In short, we don't know. The thermometer in the picture is one of our "Free Air Temperature" indicators in the helicopter, and as you can see it's pegged. So the temperature at the time of the picture was at least 122º F. The good news is that while the temperature stays pretty constant up to around 3000 feet, when we go up to 6500 feet or so it cools of considerably. Guess where we spend as much time as possible in between stops? 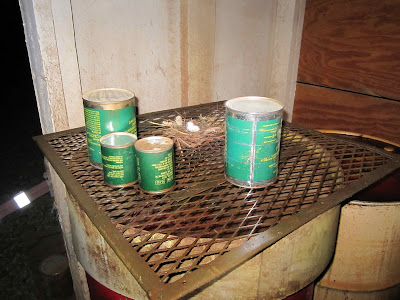 This picture is of our hazardous waste collection point, where we collect oil and hydraulic fluid waste to avoid contaminating the crude oil pretty much seeping out of the ground with refined oil. Yes, that is a bird nest complete with eggs built on the drain screen. No one said birds are particularly bright. This one at least attempted a nest. One morning we preflighted a helicopter to find a bird egg frying on the stabilator. The bird apparently laid the egg while roosting on the tail rotor. This strategy would be referred to as "epic fail." 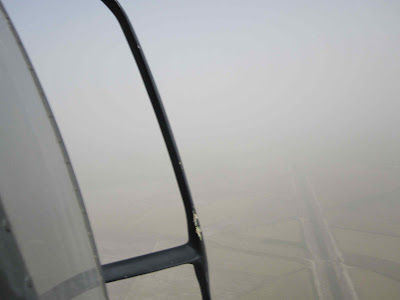 Flying conditions vary - we are normally restricted by visibility. This picture shows what the weather guessers refer to as "2 miles visibility" as viewed from 500 feet. No, we weren't following the canal, it just happened to be going the same direction we were. Really. We can fly in considerably less, but don't unless there's a good reason. Since the tactical situation here is pretty calm these days, we seldom need to go out in worse weather. 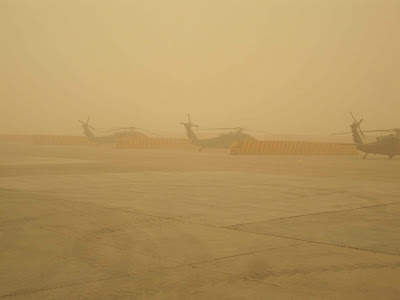 This would be worse weather. You'll notice that the helicopters are sitting on the ground. 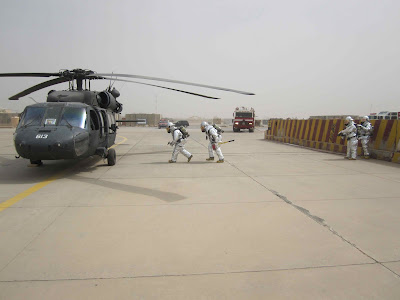 Here we have the local crash crew practicing. We provide them a helicopter and crew for training purposes on a regular basis. I'm not sure who's more uncomfortable in all their gear - them or us.
Overall things are going well with the exception of power and internet issues. The main generator that powers our CHUs has been failing pretty much daily for the last couple weeks, although it may have finally fried itself since I saw a crane being positioned out there earlier today (we're on the back up generator.) Our internet connection keeps failing for no apparent reason - I've had one power failure and about four internet failures trying to get this written and posted. That being the case I think I'll hit the Publish button now...