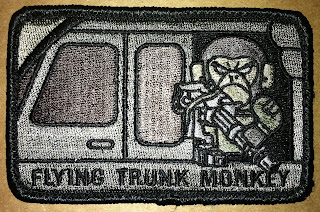 Several years ago Suburban Auto Group released a series of "Trunk Monkey" commercials.  Somehow this struck a chord with the crew chief and gunner community in Army Aviation, who promptly joined the ranks of Flying Trunk Monkeys.  What can I say, I like that chimps attitude.

Being a Blackhawk crew chief covers a lot of territory besides flying.  We spend a lot of time doing inspections and maintaining the helicopters, not to mention training.  Training varies from mind-numbingly-boring-required-by-someone-or-other-and-having-nothing-to-do-with-anything to "Oh, yeah...  They pay me me to do this!"  Gunnery training generally falls into the later category.

Earlier this month we took three helicopters and 28000 rounds of 7.62mm ammunition to the West Tac area of the Barry Goldwater range in Gila Bend.  This has got to be the premier aerial range in the world.  The Air Force fast movers play here, and when Prince Harry was doing his Apache weapons training, this was the place.  I believe he was wearing clothes on that trip, but I digress...

I put together a little clip of about 800 rounds worth of the fun for your viewing pleasure, including a brief view of what a passenger at night sees.