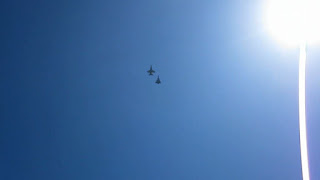 Lex was laid to rest at Ft Rosecrans National Cemetery Tuesday.  I had the privilege to attend the ceremony and reception.  FbL did an excellent post on the day that I highly recommend.

It was a beautiful day - a little cool, but perfect for wearing the Class A uniform.  The service was held overlooking the bay and Naval Air Station North Island.  It was a simple memorial, well attended by Lex's friends - both peers who had served with him and those of us who knew him only through correspondence and the online world.  The salute and taps was the moment of closure for me, when I could accept Lex has really moved on.  I was expecting an F-18 fly-by, but when I looked up and saw the F-18 and F-21 in close formation it was perfect.

The reception was held at the submarine base on Pt Loma.  For the next several hours many stories were told, memories shared, and friends and family celebrated his life.  It was wonderful to meet the family and friends he had so often written about.

The introductions at the reception were amusing - many of us took to introducing ourselves by name followed by screen name.  I wonder if there's a protocol for that?  While it was a sad occasion, the many face to face meetings with friends we had never met were a gift.

I would again like to express my respects and condolences to the family, and thank them for sharing their husband and father with us for these many years.  They are a wonderful family and I wish them all the love, strength and support for the future. 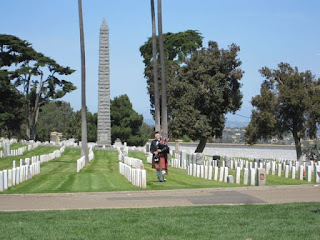 This one's for OldAFSarge 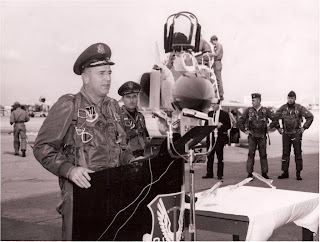 The first production F-4C is delivered to McDill AFB, November of 1963.  My Dad tells me they were happy to no longer have to borrow Navy F-4B's for training.
Posted by Pogue at 4:05 PM 1 comment: 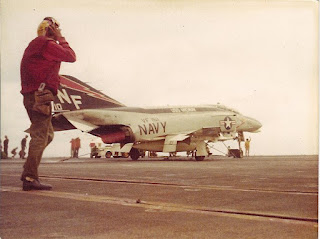 Cross posted from "The Lexicans."

Even though I’m Army Guard now, I started my military career in Naval Aviation as an avionics technician (AT) working on the E-2B aircraft.  In 1976 I was attached to VAW-115 aboard the USS Midway.  We were home ported in Yokosuka, Japan, and spent most of our time at sea.  Working day shift was 0700 to 1900 every day and the normal routine was to keep an E-2 in the air continuously during flight ops.  The two years I was on the Midway there was never a day at sea we didn’t fly.  On a couple of occasions we attempted to have stand downs (no fly days) but it was not to be.
This particular day was unusual in that the CO decided that we had been working hard long enough, and declared a stand down.  Very unusual, kind of like a snow day in school.  The air wing was put at “Alert 30″ meaning that you needed to be able to launch on 30 minute notice. Alert 30 was the lowest alert status at sea.

We needed to daily our alert bird and move the air conditioning unit used for maintenance to the hanger deck, so I went up a little early to take care of the preflight.  As I walked past the island I saw a couple of “snipes” – engineering types looking around with wide eyes.  Being that a flight deck is a dangerous place during ops, no one except flight deck personnel were allowed on deck during flight ops.  This was a rare opportunity for these guys to sight see.  I stopped and chatted with them for a few, told them not to cross any yellow and red diagonal lines (danger areas) and not to touch the aircraft.  Even when they’re shut down they can bite.  Thus reassured they went off to explore, and I did my daily inspection.  Once this was done I went over to the air conditioner unit (on wheels, they were normally towed by tractors) and waited for some of the other guys from the shop to come up so we could push it to the elevator.   It was a beautiful morning, and looking out over the flight deck I could see a tech sitting on the wing of an A-6, leaning against the fuselage, resting his eyes, and the two snipes rubbernecking back on the angle deck looking at the F-4′s and A-7′s.  They were the only people in sight, and it was so quiet you could hear the steam hissing from the catapults.  This was one of those moments you remember.  A quiet morning at sea was a rare event.

Rare enough that apparently the Soviets noticed we weren’t doing flight ops as was normal, and decided to send a Tu-95 Bear out to see what was up.  Maybe we had an engineering casualty, i.e., the motor broke, or something.  Of course, our radar pickets noticed the Bear at extreme range – the Bear has a radar cross section roughly the size of Detroit – and warned the task force.
A word is in order here on that whole alert status thing.  As I mentioned, alert 30 was the default for everyone.  Alert 15 had crews suited up in the ready room.  Most often this was the duty KA-6 tanker.  The alert 5 was normally two F-4′s parked on the catapult, crews aboard and the air start unit plugged in and ready to go.  When we weren’t in flight quarters it was normal to have two F-4s on alert 5 and a tanker on alert 15.

So here we are in alert 30 with a Bear coming in.  I would like to know what was actually said on the bridge.  I think they meant to say “Set and launch the Alert 5!” which would have gotten a couple of interceptors up as quickly as possible.  What was said over the 1MC (PA system to non swabbies) was “Launch the Alert 30!”  Uh-Oh…  that translates to launch everything that will fly, as soon as you can.  I’m sure the bridge immediately realized what was going to happen, but what the heck, this ought to be interesting.

It was beautiful on the flight deck.  Remember that idyllic scene I described a moment ago? The first thing to happen was a single “huffer” (tractor and air start unit) comes out of it’s staging area at high speed with it’s turbine winding up.  People are now coming out of the woodwork, crews are manning up, aircraft are starting and it’s a race to see who could get the the catapult first.  As it turns out, that was the air conditioning unit we were pushing to the elevator.  Taxiing behind us is an A-7 who got started before anyone else.  As we get to the elevator the A-7 takes the starboard cat and I hear the Air Boss yelling “Get those snipes below deck!”  Those poor guys must have been terrified, and when you’re standing in the middle of the deck it’s not obvious where the exits are.

We cleared the deck in a little over 30 minutes, and I’m sure the Soviets were impressed.  Since we had gone to the trouble, we went ahead and flew the rest of day as well.  You know, that was kind of fun.
Posted by Pogue at 6:09 AM No comments:

Tech review - so just what good is the iPad, anyways?


Loralee has a post up describing her longing for an iPad.  As someone who really likes shiny stuff I completely understand.  The comments cover the entire love Apple/hate Apple spectrum, but one of the themes I notice is: My phone does every thing the iPad does.  Related theme:  It doesn't do what my laptop does.

So, what does the iPad have that the iPhone doesn't?  In short, a bigger screen.  That's pretty much it.  Almost all of the apps available for the iPad run or have versions that run on the iPhone.  That being said, is the larger screen worth it?  If you're going to be surfing the web a lot, it is nice, and text entry is easier than on a phone.

The down side is that since the apps are very phone like, they tend to be limited compared to what you find on your laptop.  Things like document processing and photo or video editing are possible, but not generally as well supported as on a laptop.  Even in terms of size, with the 11" MacBook Air available (at a higher price, of course) it's difficult to make an argument for portability.

Where the iPad does come on strong is in the special purpose applications.  For example, they've taken the flying community by storm.  There are apps like available that support flight planning, provide charts and moving map displays that are half the price of the purpose built electronic flight bags.

If astronomy is an interest, apps like SkyORB provide current sky charts for your location.

There's lots of education apps that are well suited to the screen size.

While it come with the iBooks app, other readers like Kindle and Stanza are available for free.  I actually use all three - I like the way iBooks handles pdf documents so I have Army and aviation publications in it.  Stanza is great for non Amazon ebooks, and is my preferred reader for getting public domain books from Project Gutenberg (yes, you can get them from Amazon, too, but they're harder to search for.)  The Kindle app is nice in lower light and for ebooks with pictures and maps.  Did you know that the ebooks have much better quality than you can see in the Kindle book readers?  The battery life is much shorter that the basic Kindle, though.

The iPad 2 is a little faster than the original, and the newest iPad has a better display, and is 4G.  There are some additional features on the newer versions, but the improvements are incremental.  Unless you really need the additional performance, an earlier iPad may suit your needs for less money.  So to wrap it up, I don't think the iPad is a replacement for either the phone or computer, but if you have the need for a tablet size application, it may do the trick.  Otherwise, it's a fun toy, but probably one you can live without.

Capt. Carroll "Lex" LeFon died Tuesday, March 6, 2012 when his F-21 Kfir crashed while supporting the Navy Fighter Weapons School. I think the best description I've heard of him is "Warrior Poet." He leaves behind his wife, son and two daughters. We pray for them and grieve.