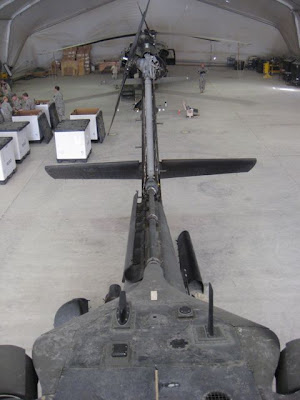 A view in the tent. The helicopter in the background is the one we rigged.
Flying is a big part of being a crew chief and a lot of fun, but we also work on the helicopters. Here in Al Kut we have both a flight company and a maintenance company. The flight company takes care of much of the routine day to day repairs and inspections while more involved work generally goes to the maintenance guys. On occasion we also get involve is some of the more in depth stuff. Earlier this month I got to work with a couple other repairers on what's called a complete rig. This is the process where all of the flight controls are set up so they operate correctly and have the right amount of travel. It's not something that gets done frequently, only after major work has been done on the aircraft or after flight control components are replaced.

A helicopter has three basic controls - the cyclic, which tilts the main rotor disk in the direction you want to fly, a collective that controls how much of a bite into the air the main rotor has, and the pedals which control the tail rotor to keep the helicopter pointing in the direction you want it to point. These controls transmit the pilots wishes to the main and tail rotor through an impressive number of push-pull tubes, fancy hinges called bellcranks and cables. Because a Blackhawk is a fairly heavy helicopter that requires a lot of force to control it there are also hydraulic systems that provide the muscle to actually move everything.

When rigging the controls the first step is called a "dry rig." This is done with all power off and consists of setting all the various adjustments to a position that will allow you to adjust them in either direction as necessary. Starting from the front the pilot and copilot controls are pinned into reference positions set up by the factory. The connections to the top of the helicopter are adjusted and connected to the first set of hydraulic servos. This first set does much the same thing as power steering in a car - they make it easier to move the controls and reduce some of the feedback to the pilot. Like power steering if these servos fail or are turned off it makes flying the helicopter more work, but doesn't really interfere with flying. The output of these servos connect to the "mechanical mixing unit." This is a nifty little collection of levers and cams that the good people at Sikorsky put into the Blackhawk to make it easier to fly by taking a single input the pilot puts in and coordinating all of the controls to achive the desired result. Yeah, it's magic. The mixer is then connected to the "primary servos" which are the muscle I referred to earlier. 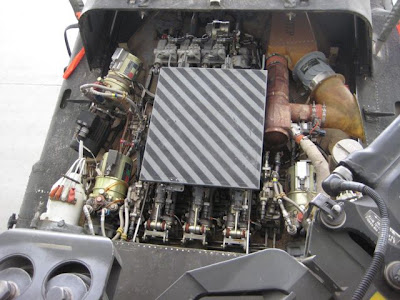 The hydraulic deck where most of the linkages we adjust are. The control rods come up through the deck near the top of the photo, back through the "power steering", into the mixer under the diagonal striped work platform to the primary servos at the bottom. The three gold things are hydraulic pumps, the white thing at lower left is one of the generators and the plumbing at the top right it the cabin heater ducting.
Once all of this is connected and adjusted to neutral settings the primary servos are hooked up to the rotor and hydraulic power is turned on. This is the start of the next part of the process, called the "wet rig." By using certain combinations of the alignment pins and measuring the angle of the rotor blades at different positions we make adjustments to get the right blade setting for a specific control input. This requires taking a lot of measurements and rotating the blades by hand to the correct position for each measurement. It took most of a day with three of us working on it to get this part done. 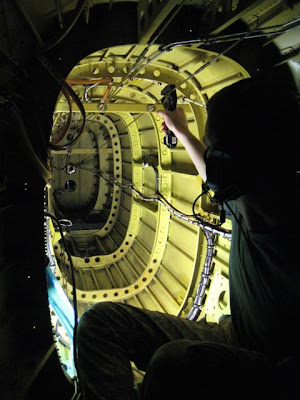 Adjusting the tension on the cables to the tail rotor
When the main rotor adjustments are completed all of the the controls and linkages up to that point are pinned in the proper test positions and the cables and linkages to the tail rotor are adjusted using the same techniques. Finally all of the adjustment points are safety wired or cotter pinned to make sure nothing changes over time. The entire process took us about three days, which is actually a little on the fast side since we had very few difficulties along the way. Depending on the particular helicopter this is not always the case. 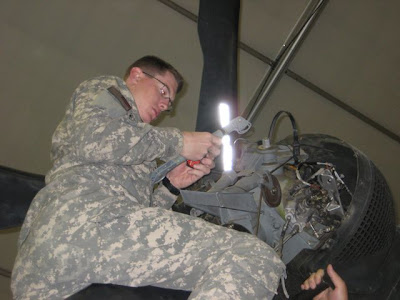 Adjusting one of the push pull tubes on the tail rotor gearbox. The reflection on the tail rotor is just reflective tape for the camera we install to balance the tail rotor.
We then started on the track and balance of the rotor systems. The main and tail rotors are balanced just like the wheels on a car, but rather than using lead weights special washers are bolted on to the hub at certain locations. There is a test set that measure the vibrations at the rotors and computes how much weight needs to be added to each location. Once these are within limits the main rotor is "tracked," which means adjusted so the blades rotate in the same plane rather than flapping all over the place. For this we start with ground runs, then move on to test flights. In our case it took 4 test flights and adjustments to go from a rather bone rattling gallop to nice smooth flight at various airspeeds. OK, as smooth as helicopters get, anyways...
Posted by Pogue at 10:22 AM No comments: