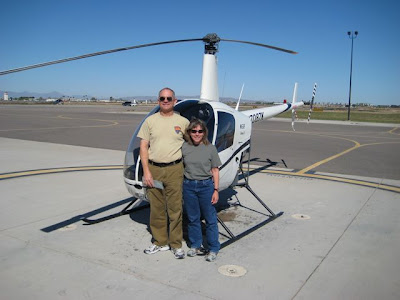 My wife (Her Accuracy) and my self have developed a tradition of taking a helicopter flight to celebrate our anniversary. This year it was to Payson for lunch at the airport cafe, the Crosswinds Grille. Originally we were planning on going last weekend, but wind and weather didn't agree, and as I told Her Accuracy, I wanted this trip to be fun, not exciting. Waiting a week was the right thing to do - It was beautiful out Saturday morning with a light wind and clear skies.
Payson isn't all that far from the Phoenix metro area, about 80 miles by the route I planned, but in a light helicopter that makes for a nice trip of a little more than an hour each way. Rather that going a direct route we went north to bypass Gateway and Falcon airspace and then north east to Bartlett Dam. I always enjoy flying by the reservoirs near town. The blue water is so rich standing out from the desert. From there the plan was to fly east over the hills and then north up to Payson.
Right from the beginning it proved to be an interesting flight. As we were cleared onto the helipad a banner plane picked up its banner directly in front of us. If you've ever watched this process the tow plane takes a somewhat unusual attitude as it catches the banner. As a spectator it looks like the banner is trying to yank the plane from the sky while the plane is trying to yank the banner from the ground, and it's not clear who the winner will be. As is usually the case the tow plane won and was shortly off to his advertising gig. Traffic being light the tower cleared us to cross the extended runway center line instead of the usual mid field crossing so we turned north and started our timer. 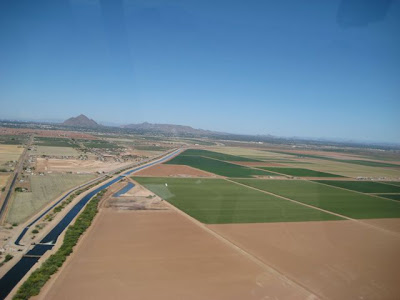 Our first navigation point was a canal crossing in an area
typical of the outskirts of town with irrigated farm land and a fair amount of open sky. This point is also a useful reference point in terms of staying clear of Falcon Fields airspace. We climb from 2000 to 2500 feet and transit past Fountain Hills. This whole time I'm keeping my eyes peeled for fixed wing traffic. Something you learn early is that helicopters in general aviation are like motorcycles on the road. No one notices you since they're not looking for you. Since an R-22 is pretty tough to see anyway I've always felt defensive flying is in order. Usually we stay down about 500 feet above the ground while most of the fixed wing prefer a little more altitude. Today visibility is excellent and what traffic is out there is visible from quite a distance. 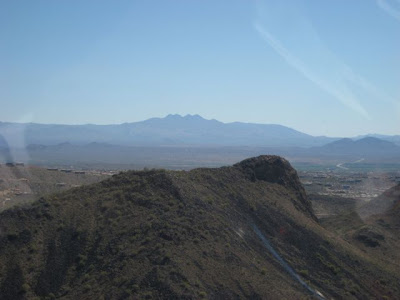 We pass over some foothills and soon we have the rough country to the east in sight. Southern Arizona is mining country, and from the air the tailings mounds of mines long closed are clearly visible. As the area grows many housing developments are appearing near these sites and I can only hope the people moving in are aware of the open mine shafts that dot the country side. Soon we're passing over the Verde River, anemic as it is down stream of the dam. The reason Phoenix is where it is at is due to several rivers that pass through the area, although now they exist primarily as dry washes after having been dammed. While this provides for electricity and water storage, it does have it's price. 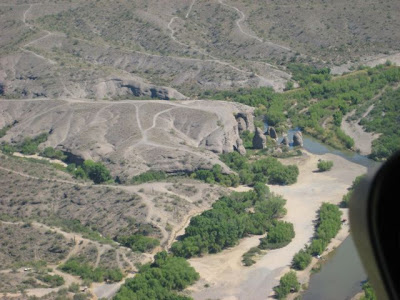 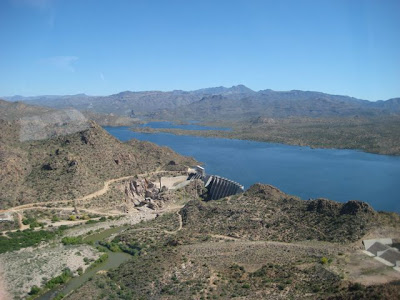 Our next leg consists of a slow climb to 5000 feet along the powerlines heading east from the dam. This route takes us through the lowest passes in the area to where we meet up with the Beeline Highway for the last leg up to Payson. As any pilot knows, power lines can be extremely difficult to see, and it's best to look for the towers. I also prefer to travel well to the side of the lines. Since we were traveling through several passes I was keeping an eye our for lines originating from one peak to another. 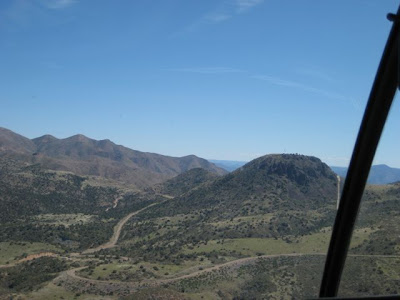 If you look closely at the hill off the nose in the photo, you can barely make out a transmission tower on the peak. The lines are running off to our right, and at one point are probably 300 feet above ground. The other bit of good news was that the angle of the sun was just right to reflect off the lines so I was able to maintain sight with them as well. 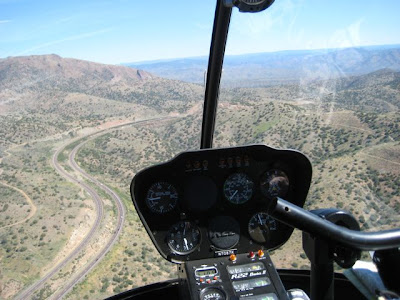 After fifteen minutes following the power line right of way we found ourselves over our friend, the Beeline Highway. Turning north the terrain drops away, and the temptation is to drop down with it and keep that 500 foot altitude I'm used to, but our destination is on top of another plateau and our traffic pattern altitude is 5700', so we may as well stay here for the time being. Listening to Unicom there's a little bit of traffic at the airport, but by the time we get there no one is in the pattern. Part of being a good neighbor is to avoid annoying people on a Saturday morning so I've swung well to the west so as to avoid overflying the town proper. Winds not being a factor we set up an approach to Runway 6. With a density altitude above 6000 feet and most of my experience being at lower altitudes I shot a shallow approach (for a helicopter - it's pretty much a normal approach for fixed wing) to minimize my rate of descent. With a nice long runway I have the option of doing a run on landing if necessary, but with today's conditions it's not necessary. Clearing the runway I taxi over to the transient parking area and call in to close my flight plan and to get a whopping 5 gallons of fuel for the trip back. All while enjoying that magnificent high country view. 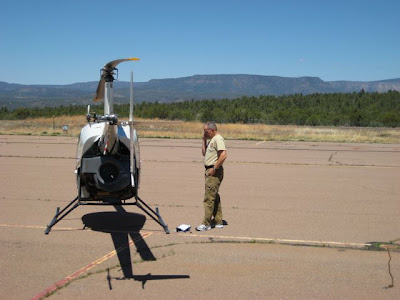 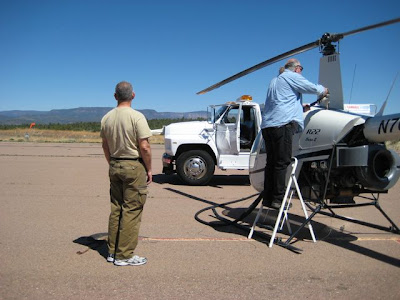 With the helicopter taken care of it was time for lunch... Chicken Fingers for Her Accuracy and a Chicken Fried Steak sandwich for myself. We can recommend both, and the Crosswinds Grill is very reasonably priced, although come to think of it, when you fly someplace for lunch pretty much everything is reasonably priced, isn't it? 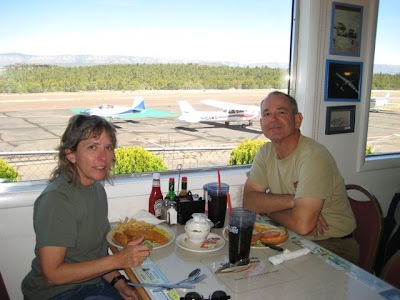 After a leisurely meal it was time to preflight the bird and start the trip home. A quick check of the weather showed that conditions were still excellent, but a pilot report indicated light to moderate turbulence on the route back. As it turned out it wasn't too bad, although my goal with passengers is to make them think they're on a couch with a view, not a helicopter. For my part I slowed down about 10 knots which helped smooth the trip out a bit. My better half doesn't seem to be prone to motion sickness, but flying in an R-22 is usually enough excitement without the chandelier ride effect. Fortunately she didn't seem to bothered by the chop and shortly we were passing Barlett Dam once more and re entering the valley where the air was smoother. While we didn't see many planes on the trip back we did see an MD500 and a Bell 407 set down on a wash on the Verde River, soon followed by an Apache not 2000 yards away. Sorry, we didn't manage any photos of those. Once past Fountain Hills it was southbound and home.

A few asides on the trip - I planned the flight intending to use GPS references, and being an old school guy I also noted my checkpoints and planned times and headings to each fix. As it turned out this was a good thing - while the GPS worked fine, the display was frequently unreadable in the bright sunlight. So the flight was pretty much all pilotage and dead reckoning. As it turned out my let times were right on and the flight was completed within 5 minutes of plan. It always amazes me how accurate flight planning can be, even for a pilot like me who is less than perfect at maintaining an exact speed and altitude...
Posted by Pogue at 4:10 PM